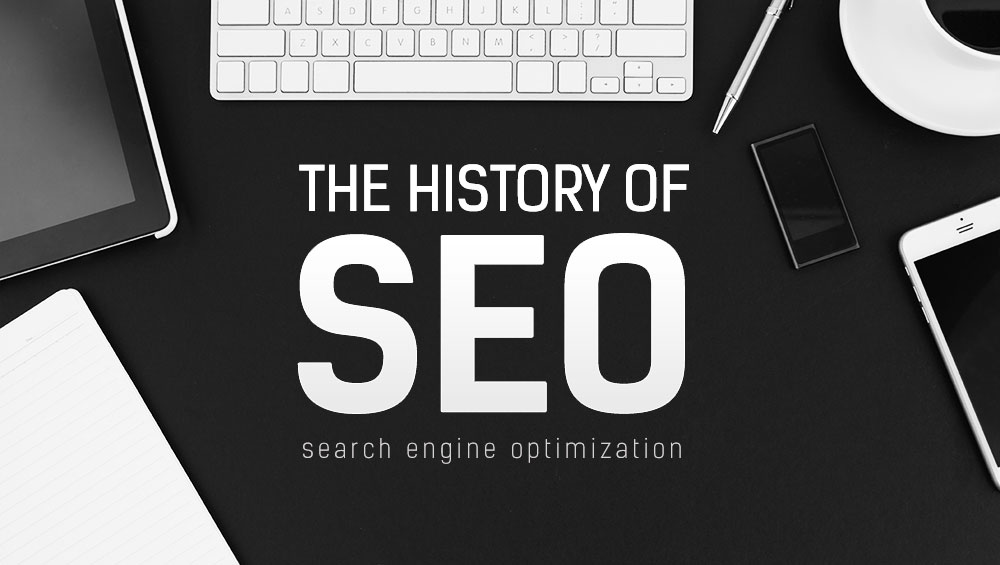 We are all aware that it exists and that it is a crucial aspect of the business.

But we don’t spend much time thinking about its beginnings;

we’re more concerned with how we utilize it daily.

However, unlike the handshake, SEO is still in its infancy and is subject to rapid change.

It looks to be a millennial, as its birth expected to occur sometime around 1991.

And, despite its brief lifespan, it has developed and evolved fast.

So, how did SEO get started, and how did it become so important?

Join us as we go back in time to attempt to figure this out; it turns out to be quite a story.

But First, a Look Back at Search Engines

In 1945, the initial notion for building a single archive for all of the world’s data came to a realization.

the now-defunct Office of Scientific Research and Development,

proposed a “collection of data and observations,
the extraction of parallel material from the existing record, and

the final insertion of new material into the general body of the common record” in The Atlantic.

In other words, today’s Google, we believe.

which some claim was the first search engine –

though this is debatable, according to Bill Slawski, president, and creator of SEO by the Sea.

However, Archie was the “best means to locate information from other servers around

the internet at the time,” according to Slawski, and it is still (very primitively) in operation.

Several key advancements occurred during the next decade, with

the more commercial versions of search engines that we know today taking shape.

Worth mentioning that Microsoft introduced Bing over twelve years later, in June 2009 –

its earlier iterations were variously known as Live

But here is where SEO comes into play.

According to the SEO community Moz, “was discovered

that by executing some very easy steps,

search engine rankings could altered and money could made via the internet.”

Those results, however, were not of high quality.
And this is where the SEO tale begins, my readers.

A Brief History of Search & SEO

became household names and more families connected to the Internet.

The issue, as previously said, was the quality of that information.

it was usually limited to that, as a large number of site owners used keyword stuffing –

repeating keywords over and over in the text – to improve rankings

(for which there were no criteria),

drive traffic to their pages, and produce appealing numbers for potential advertisers.

There was also some scheming going on.

In addition to keyword stuffing, individuals were also employing

“excessive and spammy backlinks” to boost their authority, according to SEL.

Not only were there no ranking criteria at the time,

but by the time search engines corrected their algorithms,

new black hat SEO tactics had begun that the changes did not address.

But then, two kids at Stanford got an idea.

That was one of the challenges Page and Brin set out to tackle when they founded Google.

In 1998, the team released a paper titled

“The Anatomy of a Large-Scale Hypertextual Web Search Engine” at Stanford.

Page and Brin originally described PageRank in the same article,

the technique that Google employs to help rank search results based on quality rather than terms alone.

Some may argue that thesis paved the way for SEO as we know it today.

The beginning of the Google conquest occurred in the early 2000s.

In the process of making search engine technology less ad-centric,

Google began to give recommendations for white hat SEO –

the sort that the “good guys” follow – to assist websites

rank without engaging in any of the usual fishy

However, because the standards did not yet affect ranking,

individuals did not bother following them, according to Moz.

dependent on the number of inbound links

to a specific page; the more of them, the better the rating.

However, there was no method to assess the validity of such connections;

according to Marketing Technology Blog,

that weren’t even relevant to search criteria in the early 2000s.

and the presenter questioned them, “Why does it work so well?”

Brin underlined in his response that, at the time,

Google was a search engine and nothing more, and that he was looking at

“the web as a whole, rather than just which terms exist on each page.”

It set the tone for some of the first big algorithm changes,

With the “Florida” change to Google’s algorithm in November 2003,

this approach to the web being about more than simply words began to take form.

the response to Florida as a major “outcry,” but it is important to remember

that numerous sites benefited from the adjustment as well.

It was the first notable instance of a site incurring a penalty for things like keyword stuffing,

indicating Google’s priority on solving for the user first – mostly through quality content.

One of the most rudimentary forms of Google’s voice search existed in 2004,

in what the New York Times referred to as a “half-finished experiment.”

And, while the technology was still in its infancy at the time

(just look at what the instructions looked like at first),

it was also a foreshadowing of the future prominence of mobile in SEO.

2005 was a watershed moment in the history of search engines.

In January of that year, Google collaborated with Yahoo and MSN to establish

the Nofollow Attribute, which designed a part to reduce

the number of spammy links and comments on websites, particularly blogs.

which utilized a user’s search and browsing history to tailor results.

Google Analytics established in November of that year,

and it used today to track traffic and campaign ROI.

The search engine industry experienced some upheaval in 2009.

Bing debuted in June of that year, with Microsoft actively pushing it as

the search engine with substantially better results than Google.

However, as predicted by SEL, there was no “Google-killer,”

nor did its content-optimization suggestions differ much from Google’s.

According to Search Engine Journal, the only obvious difference was Bing’s

preference for keywords in URLs, as well as capitalized phrases and “pages from major sites.”

In August of the same year, Google offered a preview of the Caffeine algorithm upgrade,

seeking the public’s assistance in testing the “next-generation infrastructure”

that Moz describes as “intended to accelerate crawling,

extend the index, and combine indexation and ranking in almost real-time.”

when it also increased the search engine’s speed, but in December 2009,

It was a step that showed SEO was no longer only for webmasters;

from then on, journalists, online copywriters, and even social community administrators

would be required to optimize material for search engines.

When you type a search query into Google, it’s

interesting to see what suggestions it makes.

This is due to the Google Instant technology, which introduced in September 2010.

According to Moz, it caused SEOs to “combust” at first until they learned it did not affect ranking.

However, Google Instant, like the growth of SEO since 2010,

despite some controversy along the road about pages whose rankings boosted by bad online reviews.

According to Google, the algorithm later modified to punish sites that used similar techniques.

That same year, the value of social media content in SEO grew.

Both Google and Bing included “social signals” in December 2010,

for example, from your network, that matched your query.

However, it began to assign PageRank to Twitter profiles that were often linked to.

The significance of Twitter in SEO does not stop there; stay tuned.

The practice of penalizing websites for inappropriately manipulating Google’s algorithm would continue.

Some of these events were more prominent than

others, including one in 2011 involving Overstock.com.

According to the Wall Street Journal, domains ending in.edu had more authority in Google’s views at the time.

its site and utilize keywords like “vacuum cleaners” and “bunk beds,”

in exchange for discounts for students and teachers.

Those inbound links would boost Overstock’s ranks for queries containing

such keywords until Overstock stopped doing so in 2011 and Google penalized them shortly after.

It was also the year of Panda, the algorithm upgrade that clamped down on content farms,

which debuted in February of that year.

Those were sites with massive amounts of regularly

They also have high ad-to-content ratios, which Panda got trained to detect.

With the first of many Penguin adjustments in April 2012,

Google made what it called “another step to reward high-quality sites” – and, in

the course of announcing it, recognized Bing’s month-earlier blog post on the changing face of SEO.

but also peppered with spammy hyperlinks that had little to do with the page’s H1.

“Above The Fold” upgrade, which began to reduce the ranks of sites with heavy ad-space above

the “fold,” or the top half of the page.

The Payday Loan algorithm upgrade, which hinted
at in June 2013 and officially carried out on May 2014,

Those were usually searching for payday loans and other things that would make your mother blush.

In any event, it’s easy to see why SEO has evolved into a full-time occupation.

Its past will only continue to unfold.

Executing it properly necessitates a high degree of expertise, ethics, and technological upkeep.

But we understand that it is not always possible to commit a single person to it,

which is why we continue to provide the finest SEO learning resources we can.

You may contact Nummero since we are a top digital marketing agency in Bangalore.